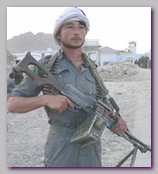 Following the Taliban daring Kandahar Jail-raid, on 06/14/2008, it became known that the Taliban have seized number of villages in Arghandab district near Kandahar city.

In response a combined Canadian-British force from NATO-ISAF and a larger number of Afghani troops were deployed to the region to take on the Taliban and “liberate” the villages. It is not the first time that Taliban is taking over a region or a town. In fact in any given moment the Taliban controls large part of South East Afghanistan and along the border with Pakistan.

When NATO-ISAF or the Afghan national army began a built up of forces in a region held by Taliban – the Taliban simply quit the region for some time in order to return when the storm is over, living behind suicide bombers, roadside bombs and an intelligence network of local Pashtu tribesmen, whose job is to inform the Taliban about any change in the number of troups, change in tactics or even the moral of the units, especially the moral of the Afghan troops.

The supply roads for NATO-ISAF, when operating outside their heavily protected bases, comes under a constant threat of hit-and-run attacks by rocket propelled grenades launched by local Taliban sympathizers, who blend into the local population, and booby trap bombs.  NATO-ISAF simply does not have enough troops to clean an area and stay for long time and Afghan troops are unreliable to cope with the Taliban since many of the soldiers are from the Pashtu tribes and collaborate with the Taliban.

Fighting guerilla is a long frustrating war, which lasts for many years and can succeed only with the support of local population, otherwise all the efforts are in vain. In the case of South-East Pakistan, the heart land of the Pashtu Tribes, the local population is with the Taliban. Ethnic and tribal loyalty in that part of the world comes always first to any other consideration.