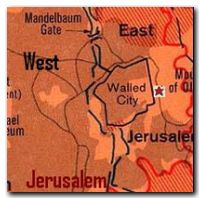 JERUSALEM was and is in the epicenter of the conflict between Israel and the Palestinians and a source of resentment against Israel in the Muslim world – Palestinian and Israeli-Arab Islamic organizations distributed all over the Muslim world the Slogans “Al-Quds (the Arabic name for Jerusalem) is in danger” and “save Jerusalem” are used to mobilize support for the Palestinian cause and to incite against Israel and the Jews.

In fact Jerusalem or Al-Quds is not mentioned in the Quraan even once and in the 1,300 years of Islamic domination over Jerusalem was nothing but a neglected poor town of few thousand inhabitants with no religious, economic or political importance to any of the Muslim empires that ruled the region. For the Palestinians Jerusalem became the symbol to crystallize the narrative of the Palestinian people since there is no other symbol or genuine history to unify the Palestinians as a nation.

Therefore Jerusalem was always the first to imply the direction of the Israeli-Palestinian relation and conflict. In the current round of peace talks between the crippled Palestinian regime under President Mahmoud Abbas, which represent roughly half of the Palestinians, and the crippled Israeli government that lost the public trust and much of its legitimacy due to the unsuccessful war against the Hizbullah in Lebanon in summer 2006, the Jerusalem subject is postponed to the end of the negotiation. The Hamas, devoted to the destruction of Israel, strengthen his grip over Palestinian society in Gaza and West Banks and his international legitimization grows, the twilight of Bush’s regime in USA and the internal ongoing crisis in the Israeli government are all reasons to believe that the last stage of the bizarre peace talks between Israel and the Palestinians will most likely not take place.

In order to put Jerusalem back on the international agenda and to encourage the interference of the international community there is an increase in Palestinian violent and terror attacks. Last night Friday 06/11/2008 yet another shooting attack was carried out against the Israeli border police in East Jerusalem which wounded two policemen. The new attack was carried out just 9 days after the Jaffa Rampage attack in Jerusalem on 07/02/2008 claimed the life of 3 Israeli civilians.

It is expected, therefore, that violence in Jerusalem might increase in the next period of time, until new regimes will be elected in Israel and USA and the struggle of power in the Palestinian territories will be solved.