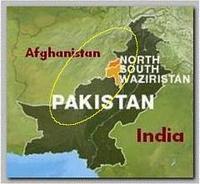 Rehman Malik, the adviser to Pakistan’s prime minister on security affairs, said on Monday 09/01/2008, they also received a report that Al Zawahiri’s wife had been in the tribal region of Mohmmand near Jaipur in North Waziristan. Pakistani forces stormed the location but did not find the couple, he said, without indicating when the raid took place. He added that al-Zawahri moved between Mohmand and the Afghan provinces of Kunar and Paktika.

“They have not only connections, I would say Tehrik-e-Taleban (Taliban’s way – Talban’s branch in Pakistan) is an extension of Al Qaeda” – Rehman Malik said, referring to a Pakistani Taliban umbrella group which authorities blame for a string of bomb attacks over the past year that have killed hundreds of people.

Pakistan is already in a sort of CIVIL WAR with pro-Taliban Pashtu tribes, which, according to Asif Ali Zardari, Benazir Bhutto’s widower and the leading candidate to replace Gen’ Pervez Musharraf as Pakistan’s president, said in a BBC interview, on Sunday 08/24/2008, have “the upper hand” (see – .Ongoing Crisis)

Ayman Al Zawahiri, is hiding in the North West provinces of Pakistan on the border with Afghanistan almost 7 years. He is moving from place to place with an entourage of family members, bodyguards and personal aids of more then 15 people. There are always some people who are waiting for him and preparing his stay. During the last seven years Ayman Al Zawahiri transmitted to the air dozens of video footages and audio massages, many of them well edited. There is no way that Ayman Al Zawahiri could survive all those years without a blind eye of the notorious Pakistani Intelligence Service – ISI, the real founder and the sponsor of the Taliban. It is also assumed that Ayman Al Zawahiri was tipped off, probably more then once, by ISI so he managed to escape, time and again, American UAV – Unmanned Aerial vehicle missile attacks such as in Damadola on 01/13/2006 (see – .Damadola Fiasco )

It seems that the Pakistani authorities and the PAKISTANI ARMY, having serious difficulties to contain Islamic militancy in Pakistan and fighting the Taliban, prefer not to go too far and to overlook the intelligence about Ayman Al zawahiri’s whereabouts because the regime fears the consequences of the killing or capture of Ayman Al Zawahiri, which will certainly plunge Pakistan to even more bloodshed. Therefore the best solution for Pakistan, in order to please USA, is to announce from time to time that Al Zawahiri was “almost captured” or “narrowly escaped death” (see – CBS 07.29.08 ).

It is not that Pakistan cannot locate Ayman Al Zawahiri – for various reasons, Pakistan prefers to ignore him.