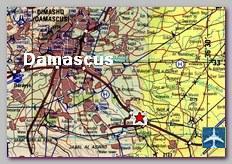 At least 17 people been killed by a car bomb in the Syrian capital Damascus, on Saturday 09/27/2008 at about 08:00. Other 14 people, all of them civilians, are reported to have been wounded in the blast.

The blast occurred close to a security post in Sidi Qada district, on the main road to Damascus International Airport, in the Southern part of Syria’s capital and close to a local military installation but also to an important Shiaa shrine.

Syria’s Dunia television claimed the car was packed with 200 kilograms of explosives. Car bomb attacks are rare in Syria, which is tightly controlled by the ruling party. This is believed to be the first such incident since a senior Hizbullah leader Imad Mughniyah was killed in a car bomb in February (see – Mughniyahs Death).

In August 2008, a senior military official Brig Gen Mohammed Suleiman close to President Bashar Assad was shot dead at a beach resort near the port city of Tartous (see – Tartous 08.03.08 ). According to International Atomic Energy Agency Director Mohamed el-Baradei the death of the IAEA’s “main interlocutor” had made the inquiry more difficult and would delay the inquiry.

So far no group or individual has so far claimed responsibility for the attack. On Monday 09/29/2008, SANA Syrian state News agency said the vehicle had entered Syria from a neighboring Arab country on 09/26/2008 (probably Lebanon) and that an Islamic suicide bomber was responsible for the blast.

The Syrian authorities reported, on Thursday 10/09/2008 afternoon, that three Islamic militants and a police officer were killed in the clash. The Militants were described by the Syrian authorities as “Iraqi citizens who were renting an apartment in Yarmouk camp” (see – Yarmouk 10.09.08 ).

The attack indicated that Syria became a terror importer after exporting terror to its neighbors in Lebanon, Israel, Jordan and Iraq fore more then two decades.

Syria is about to be effected from the success of USA to cope with Al Qaeda in Iraq. Thousands of Islamic volunteers who fled Iraq, shifted the focus of the war on terror to other regions primarily Afghanistan, North Africa (Maghreb), especially Algeria, Lebanon, Yemen and, eventually, Syria too.

In his purported confession, Abdul Baqi al-Hussein said he and 10 other suspects had planned to attack Syrian security offices and foreign diplomats.

One of the other men in the broadcast said the fugitive leader of Fatah al-Islam, Sheikh Shaker al-Abssi, had made his way into Syria from Lebanon, but that he had not been heard from since July. The woman shown among the group was identified as the daughter of Shaker al-Abssi (see – Damascus-Blast confessions).