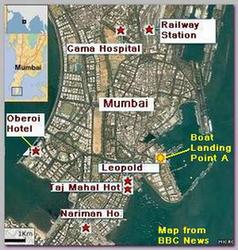 Gunmen have carried out, on Wednesday 11/26/2008 at about 23:00, a series of coordinate attacks, in the Southern luxury suburb of the Indian city of Mumbai (Bombay), killing at least 180 people, including at least 21 foreigners, and injuring 400 more. Mumbai, the pumping heart of India’s economy, was often targeted in the past by Islamic terrorists. “The perpetrators have used automatic weapons and in some places grenades have been lobbed,” said AN Roy, police commissioner of Maharashtra state.

At least ten high-profile locations were hit in India’s financial capital, including two luxury hotels, Taj Mahal Palace, where about 40 hostages were reported to be held on the fifth floor, and the Oberoi Trident Hotel, where over 100 more hostages were reported to be held. The two hotels were used by foreigners as well as local businessmen and leaders. Several European legislators visiting Mumbai ahead of a European Union-India summit, were reportedly among people who had barricaded themselves inside the Taj Mahal. Fire crews evacuated people from the upper floors of the Taj Mahal Palace.

11 officers were killed in the skirmishes around and inside the Taj Mahal lobby in the first evening when the terrorists managed to turn the lobby and the entrance of the hotel to a killing zone using hand grenades. Among those killed are the head of Mumbai’s anti-terrorism unit Hemant Karkare and two other senior officers, officials say. Other 5 policemen where killed in other locations in the opening hour of the attack.

The luxury Leopold’s restaurant, neighbor to the Taj Mahal Palace (pic), was taken over by terrorists, at about 21:15. They entered the café and fired indiscriminately for about 10 minutes. The terrorists then walked calmly around the room executing one by one with one single bullet in the head or neck. At about 21:40, the Leopold’s attackers withdrew to the near by Taj Mahal hotel before any help reached the scene.

In the city’s crowded Chhatrapati Shivaji train station the terrorist opened fire indiscriminately on the crowd, killing many and wounding many more. Some of the assailants were shot dead or captured by the police on the scene. A hospital nearby was also attacked by indiscriminate fire as well as the police headquarter located nearby.

The Jewish ultra-orthodox group ‘Habad’ center, popular among many Israeli backpackers, was seized by more then 4 terrorists and eight were taken hostage after the hostage takers released the Rabbi’s young son and Indian nanny.

Commandos have surrounded the two hotels and the 6 floors Jewish Habad center called also the Nariman House, where it was believed that the armed men are holding dozens of hostages. The Taj Mahal Palace, was eventually cleared from terrorists, only as late as Saturday 11/29/2008 before dawn, after two days of fighting. Troops had come across 12 to 15 bodies while sweeping through the Taj, which caused enormous damage to the hotel. Three terrorists, one of them a Pakistani, were captured in the hotel and a yet unknown number of them were killed.

At Oberoi hotel and the Jewish center exchange of fire continued all Thursday 11/27/2008 long. At night an Indian commando set free 7 hostages in an apartment close to the Jewish Habad center at Nariman House but the center itself remained in the hands of the perpetrators.

On Friday 11/28/2008 before dawn the Indian Commando finished to clear the Oberoi hotel, where 36 bodies were found, and released over 130 hostages. Soon after the Indian commando began to take on the Jewish Habad Center.

In the afternoon of Friday 11/28/2008, the Indian commando committed the final assault on the Jewish Habad center at the Nariman House, and cleared the compound from terrorists. The army found out that all the 8 Jewish hostages, including 4 Israelis, were tied and already dead.

On Saturday 11/29/2008 morning, 57 hours from the start of the terror attack, the Indian military commander in Mumbai enounced the end of military operations after all the sites where cleared from terrorists.

A claim of responsibility has been made by a previously unknown group calling itself the ‘Deccan Mujahideen’ in emails to news agencies. But it is still premature to know who is really behind the attack.

As to Friday 11/28/2008, the whole picture of the right number of casualties, the number of terrorists who took part in the horrendous raid, their origin and motivation is yet unclear. The Indian authorities are reluctant to release any information obtained from the captured terrorists and the initial results of the investigation.

The latest shootings come at a time when ties between India and Pakistan, which often supported terror in India over the Kashmir ongoing crisis, have improved. Just days ago Pakistani President Asif Ali Zardari told a summit in Delhi that Pakistan would not be first to carry out a missile strike on India.

The two countries have a joint anti-terror mechanism whereby they are supposed to share information on terrorist attacks.

A week later, on Wednesday 12/03/2008, While searching 150 bags abandoned at the Chhatrapati Shivaji train station, police found one that looked suspicious and called the bomb squad. They found two bombs of 4kgs each inside, of the same consignment which the terrorists had brought with them, and defused them.

* A well coordinated attack on several locations, simultaneously, is typical to Al Qaeda or other Islamic radical organizations. But Islamic organizations prefer, as a weapon of choice, to use explosives and to base their attacks on bombings. In some cases shooting was used by Islamic militants to pave the way for suicide bombers, car loaded with explosions or diversion but not as the core of the attack. The INDIAN Parliament Attack in Delhi, on 12/13/2001, also based on using light arms and shooting, was a rare exception.

* In contradiction to initial reports – the attack in Mumbai was carried out by only about 10 perpetrators. 9 were killed and only 1 captured. It is possible that an unknown number of attackers managed to flee the scenes.

* Such a terror attack, which dragged the local army and police to few days of street fighting and urban guerilla, caused major confusion and paralyzed a multi million metropolis for about 60 hours, is unprecedented in the history of modern terror attacks. The original thought, the daring tactics, the long preparation and the bold execution of the attack resemble The 9/11. Such also will be the consequences.

* The Chhatrapati Shivaji train station, Taj Mahal Hotel, the Oberoi Trident Hotel, Leopold restaurant or the Cama Hospital are well known landmarks of Mumbai. They are always crowded and an easy target for terrorists, with huge potential to cause many casualties as well as gaining world wide publicity. The Nariman House, an average residential house, where the Habad Jewish Center is located, is an unknown and meaningless place for most of Mumbai residents. Nariman House is only rarely crowded with more then dozen people, except in Jewish holidays, and is, by all means, a worthless target. The Jewish center was also the only place where the hostages were tied up, with hands behind the back, and killed in an execution style long before the military operation of the Indian army to take over the location began.

It is almost certain that the Jewish center was selected specifically because of strong anti-Semite hatred toward Jews and Judaism.

* If indeed, as initial intelligence and investigation reports suggested, the terrorists’ base of operation was in Pakistan, the attack is a major blow to peace efforts in the Indian subcontinent and to the new fragile democratically elected civilian regime in Pakistan. It also raises the question if the Civilian regime is able to control its intelligence apparatus – ISI, and much more important, its nuclear capacity.  See – Mumbai-carnage investigation and Mumbai-attackers .