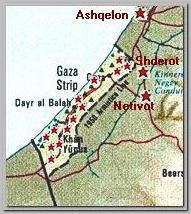 On Saturday 12/27/2008 at about 11:30, Israeli Air Force caught the Hamas by surprise and launched a massive air strike on over 100 military and Hamas targets in Gaza Strip. The attack was timed to the graduation ceremony of a Hamas police officers’ course where many where killed, including the chief of the Hamas Police Maj.-Gen. Tawfik Jaber, senior officers and Hamas leaders. The Hamas reports over 170 fatalities, almost all of them from the armed apparatus of Hamas.

The attack came just days after the Israeli cabinet gave the military final approval to counter ongoing Palestinian rocket fire against civilian communities in the Western Negev. Over 400 rockets and mortar shells were fired toward Israeli villages and civilian targets over the last month.

Gaza health official Moawiya Hassanain said earlier that over 120 people were killed, and at least 200 injured.

Despite the massive casualties, Hamas remained defiant, vowing revenge and calling on all other Palestinian factions to join in the fight.

Minutes after the first wave of air strikes hit areas in the southern Gaza Strip, Palestinians reported a second wave which targeted installations in the center and the north of Gaza Strip. Israeli Channel 2 reported that 60 planes were involved in the attack, and nearly 100 targets were hit. Hamas’s Interior Ministry said that all security compounds in Gaza were destroyed. Hamas responded with rockets fire on Israeli villages that killed an Israeli citizen in Netivot and wounded two others.

The Israeli raid sparked a debate in the Arab and Muslim World. Moderate and pro Western countries like Saudi Arabia, Jordan and especially Egypt are blamed by pro Iranian coalition of Hizbullah, Syria and Iran of supporting Israel against the Palestinians and calls upon a total mobilization against Israel. Hizbullah even threatened to join the Palestinians in Gaza in defending the “Palestinian cause” (see – Nakura 12.25.08 ).

Egypt and its partners said they warned the Hamas in Gaza over a long time to cease the fire against Israel because, eventually, Israel will respond. But it was Iran who incited the Hamas to carry on with the daily shelling of Israel despite Egyptian warnings. It is Iran and its allies who cause constant instability in the Middle East and use the Palestinians as a tool in the service of Iranian interest.
***  See daily reports – Cast-Lead Diary  ***
* Related topics –