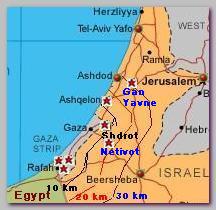 * Israel continued its bombardment, which was concentrated on the border of Gaza Strip with Egypt, in order to destroy Rafah tunnels, the main supply artery to Gaza. Israel also bombarded a section in Gaza Technical Institution where the rockets fired toward Israel were planned, partially manufactured and some of them stored. About 30 Palestinians were killed.

* Hamas responded with 22 rockets, one of them targeted a suburb of the port town of Ashdod – Gan Yavne, 32 km away from Gaza. Hamas also threatens to unleash waves of suicide bombers against Israel.

* Israeli Arabs, Palestinians from East Jerusalem and about 500 Left Wing Israelis in Tel Aviv demonstrated against IDF operation in Gaza. In some places the demonstration turned violent and stones were thrown on by-passing cars.

* Palestinian President Mahmoud Abbas, Egypt and some Arab newspapers said the Hamas was warned time and again and must, now, bear the consequences. Syria canceled its indirect peace talks with Israel and Iran called upon a Palestinian uprising – a third Intifada. The international community condemns both sides and demands immediate hold in all operations.