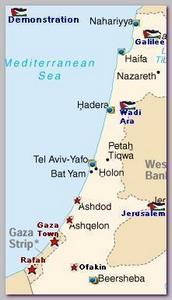 * The Hamas managed to partially recover. The organization tripled the number of rockets, over 70, fired at Israel. Three Israelis were killed: a constructer in Ashkelon, a mother of 4 in the port town of Ashdod, 33 km Northern to Gaza Strip, and an army NCO in a mortar attack on an Israeli military compound. Two Palestinians carried out sporadic knife attacks in Israel and wounded several Israelis. Protest of Israeli Arabs against Gaza operation increased and turned violent in East Jerusalem, the Galilee and Wadi Ara. Another Israeli town, Ofakim, 23 km East of Gaza Strip was shelled, for the first time, by three long range rockets.

* Israeli IDF Air Force continued pounding Gaza in which over 20 Palestinians were killed but the Air Force clearly runs out of targets and is loosing its initial impact. Over 360 Palestinians were killed since the operation began. According to Israeli officials about 90% of the casualties were Hamas militants. At the same time 100 Lorries with humanitarian aid entered Gaza through Rafah border crossing with Egypt.

* International pressure on Israel to cease its operation is increasing and Israel is blamed for un-proportional response. In many places in the world there are massive demonstrations against Israel. It seems that the window of opportunities for Israel is slowly closing down and the political watch ticking.

* On the third day Israel looses its momentum politically and militarily and the Hamas is scoring points. Only a sophisticated ground operation can change the direction from deteriorating to a replay of the second war in Lebanon against the Hizbullah in summer 2006.