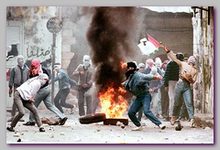 * Friday is always a sensitive day in the Muslim World – hundreds of millions gather in Mosques to here the weekly preaching and to pray. It is from the Mosques, on Friday, when all disturbances, rallies, demonstrations, clashes and even revolutions are ignited time and again. Hamas in Gaza did its outmost to ignite large scale riots in the West Bank and in the Sunni Arab Muslim World. Friday 01/02/2009 was a crucial test for Hamas in which he failed.

In the West Bank there was a combined successful effort of the Palestinian Authority security apparatus, trained by UK and USA, and Israeli IDF, to contain any possible threat. Drastic measures were taken all over the Arab world and the Hamas effort to flood the streets of the Middle East with demonstrators completely failed.

* Few hundred foreign citizens who live in Gaza Strip were evacuated from Gaza. The evacuation sparked rumors about an inevitable Israeli ground assault and raised tension in Gaza.

* Hamas leader Khaled Mashaal threatened, from Damascus, Syria, that if Israel will go on with its operation “there will be many more Gilad Shalit” (Gilad Shalit is an Israeli soldier kidnapped on 06/25/2006, from a military post within Israeli borders with Gaza Strip). The threat is a first sign of frustration or even despair in Hamas leadership.

* In the International community Israel continued, successfully, to contain the criticism against its operation, to make people listen to its claims, although not necessarily to agree with them.  President George W. Bush, on Friday 01/02/2009, branded the Hamas rocket attacks on Israel an “act of terror” and outlined his own condition for a cease-fire in Gaza, saying no peace deal would be acceptable without monitoring to halt the flow of smuggled weapons to terrorist groups.

* In day 7 Israel gained more time to go on with its operation, Hamas failed to ignite mass demonstrations in the Arab world and is showing first signs of frustration and confusion.