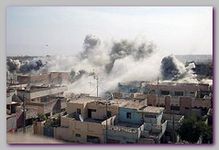 Falluja – After long period of suicide and car bombs attacks on American forces near and around Falluja (in the picture) in Iraq, about 70 km West of Baghdad, and constant violation of so called unofficial ‘cease fire’ understandings, the Americans had enough and, on 11/07/2004 dawn, launched a massive offensive on Falluja aimed to uproot Al Qaeda Islamic insurgency in Falluja. The second battle for Falluja, a town of less then 300,000 people, lasted up to 12/23/2004. American Army sent to Falluja the equivalent of three fighting brigades, a little less then the four Israeli fighting brigades in Gaza populated with 1.4 millions inhabitants (01/2009).  According to American sources USA army faced 3000 Islamic insurgents organized in small fighting squads. The Hamas in Gaza had a 16,000 army corps organized in 4 brigades and trained by Iranians and Hizbullah in urban warfare.

According to American numbers up to 6000! Civilians were killed throughout the 46 day operation – 2% of the initial population of Falluja. About 1000 insurgents were killed too in Falluja – 14% of the total number of casualties. Over 70% of the population fled the town.  Residents were allowed to return to the city in mid-December 2004, only after undergoing biometric identification, provided they carried their ID cards all the time. USA officials report that “more than half of Fallujah’s 39,000 homes were damaged, and about 10,000 of those were destroyed.” Which means over 25% of the town was basically demolished, including 60 schools and 65 mosques and shrines used as warehouses for ammunition and explosives. By March 2005 only 30% of the original population of Falluja returned home. 77 American troops were killed over the 46 days of the battle. On the 16th day of the battle 30 USA soldiers were already killed – comparing to 7 Israeli soldiers killed fighting within the densest populated area in the world – Gaza Strip. (see – Falluja Battle )

According to Palestinian figures about 900 Palestinians were killed so far in the Israeli offensive Cast Lead – 0.0007% of Gaza population, a third of them civilians. Even in the worst scenario the number of destroyed buildings in Gaza will be very far from the 10,000 buildings totally destroyed in Falluja. There is also yet another small difference between Fallujah and Gaza – no resident of Falluja ever shelled American towns or launched rockets for years on American schools and kindergartens on American soil. American soldiers fought 10,000km away from home – not 10,000 meters away.

* The controversy between Hamas Leadership in Gaza and Hamas leadership in Damascus became public. Hams in Gaza is under immense pressure from its own population and under the pressure of the Israeli Army slowly closing in on them, while  Hamas leadership in Damascus is under opposite pressure from its sponsors – Iran, Syria and Hizbullah to go on with fighting. Hamas delegation from Gaza,  who left Gaza on the Evening of Friday 01/09/2009, in full coordination between Israel and Egypt, for talks about a possible cease fire in Gaza, categorically demanded an immediate cease fire under Egyptian conditions.  On Sunday 01/11/2009 evening, Hamas cabinet spokesman in Gaza called upon all officials to return immediately to work and to prepare themselves to the reconstruction of Gaza – the first public sign that Hamas is giving up and the understanding of Hamas that if they still want the support of the Palestinian population it must be through rebuilding Gaza and not through ongoing skirmishes with Israel.