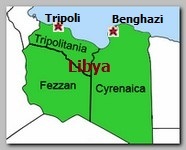 Being obsessed with exporting democracy to the Arab world The Western Democracies refer to the current Middle East chaos as a social revolution of the Arab masses in an effort to shift the Arab world toward democracy (see – MEAST CHAOS ).

In some countries, especially in Tunisia (Jasmine Revolution) and Egypt, there are buds of middle class. The societies of those countries are not functioning in accordance to tribal politics and long lasting tribal conflicts have little influence on internal matters. In Libya, Yemen and other countries in the Middle East the tribal conglomerate is the base of internal politics. Furthermore in Libya and Yemen there is no such thing “middle class” and without middle class there can be no democracy. Yemen of nowadays was formed when Northern Yemen invaded South Yemen in 1993 and forced unity on the South. Ever since the south is opposing the North and protests in the South are not about democracy to the tribal society of Yemen but about separation from Northern Yemen and reforming a separate state in the South.

In Libya the story is similar. Only in 1934 the Italians bundled Cyrenaica, and its capital Benghazi, in the East with Tripolitania in the West and the few thousands nomad tribes in the Sahara, in Fezzan province to one country – Libya. All were put, like in Jordan, under the rule of Cyrenaica’s sheikh Sidi Idriss, the head of the Senussi tribe as the Emir. In 1951 Idriss Senussi became the King of Libya.  The current head of Libya Muammar Gaddafi, who took over in 1969 in a military coup, is originally from the southern nomad tribes of Fezzan and he allied himself with the powerful tribes of Tripolitania. Tripolitania, once a shelter for pirates, even was in war with the USA in the years 1801-5. Together they toppled the hegemony of Cyrenaica’s tribes on Libya and formed a new elite of Tripolitania and Fezzan. No wonder that the unrest in Libya fits into the old conflict between the Eastern tribes of Cyrenaica and the Western tribes of Tripolitania. But in Libya in Tripolitania or in Benghazi there is no real middle class to support and sustain democracy.

Although everybody is shouting freedom the unrest in Libya is not about democracy for all, the way the West would like to witness, but about tribal hegemony. When leader Muammar Gaddafi promised in his speech, on Tuesday 02/22/2011 evening, to uproot the enemy of Libya inch by inch the world referred to the speech as a crackdown on freedom and democracy. Actually it is the old endless tribal conflicts with one coalition of tribes cracking down on an adversary alliance. Unfortunately those conflicts generally end with terrible bloodshed.
* Euphoric Libyan rebels have moved, on Sunday 08/21/2011 night, into the centre of the capital, Tripoli, as Muammar Gaddafi’s defenders melted away (see – Gaddafis Collapse ).