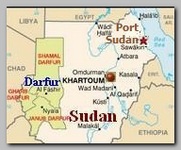 “A plane bombed a small car which was coming from Port Sudan airport to the town … There were two people in the car and both were killed. The vehicle was completely destroyed,” Mohammed Tahir, the speaker of the Red Sea state parliament, told the AFP news agency on Tuesday. The plane flew in from the direction of the Red Sea, destroyed the vehicle at about 22:00 and returned in the direction from which it came, Tahir said (see also – Secret-War ).

The Sudanese Media Centre, a news agency reportedly linked to Sudan’s state security apparatus, said the army responded with missiles that the plane managed to evade.

The centre “confirmed it was a foreign plane” but did not say where the plane came from or where it went and did not identify the two dead people, who were in the car when it was hit. A police official suggested a missile had been fired from the sea.

A witness told Reuters news agency that there was heavy presence of security forces at the scene, about 20km from Port Sudan, the capital of Red Sea State, 660km northeast of capital Khartoum.

In 01/2009, a convoy of suspected arms smugglers was hit by unidentified aircraft, also in Red Sea State. That attack was reportedly carried out by Israel – to stop weapons bound for Gaza. At least 40 people were killed in the incident, which was disclosed only two months after it occurred. State media said the death toll was 119 (see – PORT-SUDAN Bombing ).

The USA maintains a “counterterrorism” base in nearby Djibouti which has been active against Al Qaeda suspects on both sides of the Red Sea, according to AFP.

The Palestinian Hamas movement has also reportedly maintained a “base-in-exile” in Sudan, and Israeli officials have expressed concern about suspected arms smuggling through the country.

Sudan’s Foreign Minister Ali Ahmad Karti said, on Wednesday 04/06/2011, Israel carried out the air strike. Intelligence sources hinted that the two men killed in the mysterious attack were Abdel-Latif al-Ashkar, who arrived to Port Sudan international airport shortly before the attack, and his driver. Abdel-Latif al-Ashkar replaced Mahmoud al-Mabhouh as the chief Hamas coordinator with the Iranian Revolutionary Guard. Hamas has close ties with Khartoum and has long maintained a base in Sudan, to which the group’s exiled chief Khaled Mashaal is a frequent visitor.