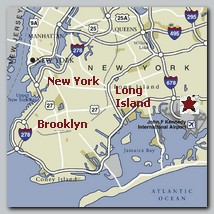 Of Friday 06/01/2007 American authorities arrested in Brooklyn, New York, USA Russell Defreitas, a U.S. citizen from Guyanan descent and a former cargo worker in JFK airport, over suspicions of conspiring to attack JFK International Airport in New York by planting explosives to blow up jet fuel supply tanks and a pipeline. That pipeline, 40 km long, is supplying highly flammable jet fuel under Brooklyn to JFK airport.

Almost simultaneously, two other suspects were arrested in Trinidad; Abdul Kadir , a former member of Guyana’s parliament, and Kareem Ibrahim, from Trinidad. A fourth suspect, Abdel Nur from Guyana, turned himself into the Authorities in Trinidad on 06/05/2007. The cell was under constant close surveillance for more than a year and a half after the ringleader Russell Defreitas recruited to the mission an FBI informant Steven Francis, on 01/06/2006 (see –  JFK cell members ).

Steven Francis testified, on Tuesday 07/07/2010, at a federal trial in Brooklyn that he and Russell Defreitas drove around the airport and took a close look at jet fuel storage tanks without being stopped. Francis secretly taped Defreitas saying he’d been eyeing the tanks for years.

Security officials admitted that the JFK  bomb  plot did not go past the planning stages.  The suspect offenders were in the stage of gathering information. They videotaped their targets, downloaded satellite images from the web and took extensive measures to seek expert advice, finances and explosives.

* The group did not have any contact or relation to Sunnite Al Qaeda. The four suspects, Shiite Muslims, have not the usual background such as training in other war zones of Islam in Afghanistan, Balkans, Middle East or Chechnya. They organized spontaneously on their own initiative.

* A year and a half is a very long time only to gather information. If the suspects did not have, yet, a specific plan and did not make the first necessary step to execute their wishes they are probably no more than a group of confused, frustrated Muslims looking for ways to express themselves.

* Abdul Kadir, the most capable member of the group, is a Shiite Muslim with ties to Iran. If there was any guiding hand in this amateurish plot it was the hand of Iran and probably more in intention of collecting information then carrying out a terror attack.

* All four suspects pleaded, on Tuesday 06/29/2010, guilty to lesser charges, which carry sentences of up to 15 years in prison instead of life imprisonment.